Cajoma Consulting has been the Swedish project partner in a European project on new forms of training for people 65+. The project Fingerprints Learning was initiated by Foundation Gaudete in Katowice, Poland and has been financed by the EU programme Erasmus+. Participating countries were: Poland (Fundacja Gaudete), Sweden (Cajoma Consulting), Spain (Associacio Cultural Catalano Polonesa) and Portugal (IPR Institute). The project enabled the exploration of the topic Fingerprints Learning as the adjustment of education to the individual needs of the elderly. The justification of the project is the need to take into account differences in the non-professional adult education. A first project  meeting was held in Barcelona, Spain in mid-November 2016 and a second meeting was held in Lisboa, Portugal in March-April 2017. A Short Training Course was organized in Uppsala, Sweden 2-6 May 2017. A final meeting was held in Katowice, Poland in the beginning of September, 2017.  Final reports and other documentation from the project are presented below. 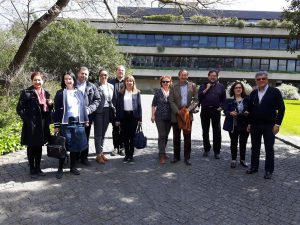 Below follows final documentation of the  Fingerprints Learning project: an article about the project published in a magazine, the final report from Cajoma Consulting and four so-called Modules from each country organization which participated in the project: